Train up a child in the way he should go: and when he is old, he will not depart from it. —Proverbs 22:6

In a typical Filipino teleserye, we can easily predict what will happen in subsequent scenes. That’s because most of the soap operas on TV have the same plot—the same storylines. Say, for instance, the bida would be from a poor family, and the rich kontrabida would bully or oppress the bida in the opening scenes. Then later on, as fate would have it, the bida would eventually escape the grip of poverty.

>As we wait for quality teleserye to replace the things that we watch on the idiot box, I am still touched every time a poor family in the make-believe TV series will do the best they can to send their kids to school. This fortifies our old belief that education liberates people from poverty. Which brings me to the point I want to raise: Our people need education planning. Whether we can or cannot afford to send our children to school, however, there are so-called Filipino traits that we need to flush down the drain.

Are you sending your children to school for you to become rich? If your answer is yes, you need to change your thinking. Your children should not be treated as investment vehicles. They are neither your emergency fund nor retirement fund. While we are raised in a culture where close family ties exist, one must keep in mind that children should not be obligated to support their parents. This is because parents should have their own plans for their own future needs (i.e., retirement funds so that they won’t be financially dependent on their children). Some would argue against this and cite the Filipino trait of utang na loob. But such argument is selfishness. Children must be allowed to shape their own future without giving them additional burdens. Actually, parents welcome the idea of giving their children a bright future. And what better way to ensure this than giving them quality education without expecting anything from them in return.

Of course, our Filipino values encourage us to repay the sacrifices of our parents. This is well and good. However, children should not be obligated to do so. Those who can give back would give anyway because that’s what makes them happy. But it is a totally different story if parents raise their children so that they can repay them in the future.

Parents should serve as role models to their children. They must guide their children in the proper planning and handling of money. This way, children would appreciate the value of money and the importance of planning for the future. This is one way to eliminate a generation of parents financially depending on their children after retirement.

Financial Literacy is not being taught

Some people say that “money is the root of all evil.” But those saying this failed to learn the value of money management. Money is the cause of evil if we are not disciplined enough to use it. Money can lead us to prosperity, but we should consider it not as the end goal, but rather the means to help us achieve our objectives. Parents must be financially literate. And they must pass this knowledge to their children. It takes years to get matured on financial literacy. It is therefore imperative that parents inculcate the importance of financial literacy to their children. One way to do this is to teach them to save in a piggy bank, among other related activities.

Others don’t really plan financially because of their bilog ang mundo mentality. This kind of mentality believes that if we are poor today, tomorrow we will become rich. Thus, parents afflicted with this kind of thinking don’t prioritize planning for the education of their children, despite their conviction that education is essential for their children to succeed in life.

These parents do not have a sense of urgency in planning for the future of their children. They procrastinate. They believe that everything can be postponed; particularly when they see that what is involved is an expense that can be done on a latter time. They don’t want to invest because they believe that they can do it later. They have the luxury of long years ahead to plan, especially if their children are still young. But the sad truth is, tuition fees are continuously increasing. And because they fail to plan and invest for their children’s education, they may be shocked to find out later that they cannot afford to send their children to college.

Train up a child in the way he should go: and when he is old, he will not depart from it.—Proverbs 22:6 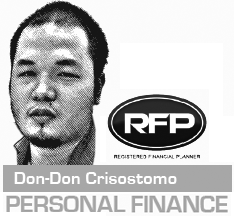 Don-Don Crisostomo is a registered financial planner of RFP Philippines. He is a Operations Senior Analyst of Deutsche Bank Group.

Previous: Common Money Pitfalls and How to Avoid Them
Next: Don’t Put Off Impending Tasks to a Later Time